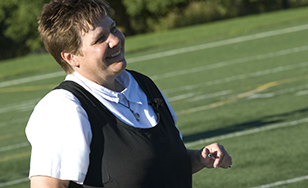 The story of St. Scholastica Monastery Sister Lisa Maurer's role as a kicking coach with our Saints football team made quite a splash when the media learned of it during her first season as a coach in fall 2014, and the spotlight returned to her the following year with even more national news coverage.

She was featured in an in-depth piece in the fall issue of NCAA's national magazine, Champion, with an accompanying video that highlights the Rule of St. Benedict and how her faith intersects with her coaching philosophies. On Nov. 6, she was featured in an award-winning Minnesota Public Radio story.

On Sept. 29, she was featured on the CBS Evening News with a story by national correspondent Dean Reynolds, reaching millions of viewers.

She was mentioned on ESPN's SportsCenter on Sept. 30, and subsequently discussed on ESPN's "Mike & Mike" show the next morning. Sister Lisa was also featured in the Oct. 1 issue of the Catholic Health Association's news publication.

Last year Sister Lisa was featured in the New York Times, Sports Illustrated, Fox News Network's "Fox and Friends" morning show, the Currents Catholic TV show in Brooklyn, NY, and the Catholic News Service, which goes to more than 200 outlets (such as the Boston Pilot) in the U.S. and abroad.

Sister Lisa's genuine love of coaching and devotion to the football players she works with shine through in every story written about her. That includes in regional media ranging from TV stations to the Duluth News Tribune, and the Star Tribune of Minneapolis. Congratulations, Sister Lisa! The entire St. Scholastica community is so proud of you!