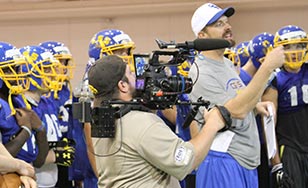 Accustomed to facing down 250-pound opponents without blinking, it takes more than a video camera to rattle St. Scholastica football players.

So when a group of Saints found themselves lined up outside a coach's office waiting to speak to a Fox Sports North camera crew, there was more excitement in the hallway than nerves.

"It's awesome," said Paul Olson, a senior social work major and linebacker. "This will put our name on the map, and hopefully speak loudly to high school football players."

The College's FSN postgame show, "Inside the Huddle at St. Scholastica," premiered on Sept. 10. All five episodes, plus a bonus playoff edition, can be found online.

The show features game highlights and interviews with head coach Kurt Ramler, players and alumni. It also spotlights some of St. Scholastica's academic programs and shows off its photogenic campus.

St. Scholastica is the only Division III school with a show on FSN, bringing added prominence to a program that has already made impressive strides in its short six-season history. The Saints have captured the conference championship and have made the NCAA Playoffs each of the past three years, and repeated as UMAC champions this year during their Nov. 8 game.

St. Scholastica President Larry Goodwin said the show will be great for school spirit, putting a spotlight on the football players, "ambassadors of what the College stands for."

Ramler called St. Scholastica "a bit of a hidden gem," and said "Inside the Huddle" will help raise awareness of the College and publicize its Benedictine values.

"I really hope the show will spread the word about how great the school is," he said.

Offensive lineman Harry Griffin, an elementary education sophomore from Elba, AL, said he was "blown away" when he came to Duluth for a campus visit. The FSN program will help to share that experience with a wider audience.

"It's pretty nice getting the school out there to show people what goes on at St. Scholastica," said Griffin, who cited the College's small class sizes and sense of tradition as his reasons for choosing to become a Saint. "It will be good exposure both for academics and athletics."

Todd Fultz with Victory Press is co-producing the show with Ryan Semanko from Elite Edge.

"It's an incredible way to spotlight St. Scholastica," Fultz said. 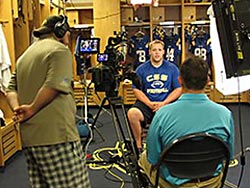 View more filming and team photos in our gallery. 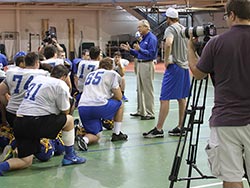 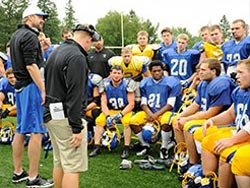 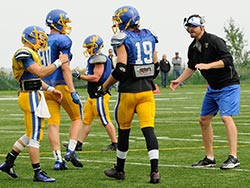 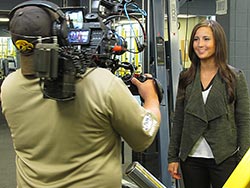