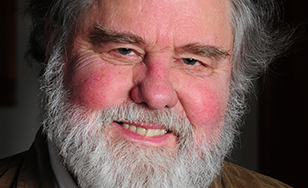 St. Scholastica will host a reading by an American poet who has translated volumes of works written by Rumi, a popular 13th-century mystic. The free presentation will take place at 7 p.m. Thursday, April 6 in the Mitchell Auditorium on campus. The public is welcome.

Coleman Barks has collaborated with scholars of the Persian language to translate the works of 13th-century mystic Jelaluddin Rumi into American free verse. Born in present-day Afghanistan in 1207, Rumi was a renowned Muslim scholar, theologian and poet who believed in the power of music, poetry and dance as a way to connect with God. His poetry has been popular around the world for more than 700 years.

Barks' translation work has resulted in twenty-one volumes of Rumi's poetry, including the bestselling "Essential Rumi." In 2005, the State Department sent Barks to Afghanistan as the first visiting speaker there in 25 years. In 2006 he was awarded an honorary doctorate by the University of Tehran in Iran. Now retired, he is a Professor
Emeritus of English at the University of Georgia.

This program is part of the Shea Memorial Lecture series, which is named for former St. Scholastica president Francis X. Shea.

According to event organizer William Campbell, associate professor of Theology and Religious Studies, Barks' St. Scholastica engagement will be the only appearance of its kind in the region this year. It's already attracting attention from poetry fans across the country, he said.

"This is a once-in-a-lifetime opportunity to see and hear this renowned poet," Campbell said.

Barks will read selections of Rumi poetry with musical accompaniment from a sitar (stringed instrument often used in Eastern music) and tabla (bongo-like drums). Each reading will be followed by a discussion about the poem, including explanations about their meaning, context, theme and importance. A reception will follow the event.