Saints have a global impact 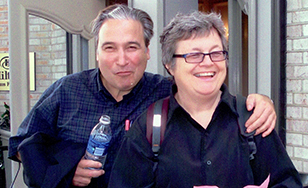 Two St. Scholastica alumni were at the forefront of reimagining the way an entire justice system operates to create life-saving societal change. Their work has had a profound impact.

In the 1980s, the late Ellen Pence '91 and Michael Paymar '83 worked with others to create the "Duluth Model," a coordinated community response to domestic violence. Three decades later that model is influential internationally.

Last October, Paymar traveled to Geneva to represent the Duluth Domestic Abuse Intervention Project (DAIP), which won the Gold Future Policy Award from the World Futures Council in partnership with the Inter-Parliamentary Union and UN Women.

"It's humbling and it's an honor after 33 years to be acknowledged on the world stage," Paymar said.

In December he and Melissa Scaia, executive director of the DAIP, discussed the award in a panel discussion at the United Nations in New York, sponsored by UN Women.

The recognition is just the latest for the DAIP, which has also been honored by the Harvard University Kennedy School of Government and the American Medical Association, among many others.

The Duluth Model has changed thought processes around the world for dealing with domestic abuse, improved the lives of countless women, men and families, and likely saved lives.

"I don't think many people in this city realize what a huge impact our community has had on police departments and courtrooms all over the globe," Pence said in a 2003 St. Scholastica Magazine article.

Back to the '80s
In 1980, Paymar was a member of the Duluth City Council and was a St. Scholastica student double-majoring in education and history through the ENCORE! program for nontraditional students.

"It was just non-stop (busy), but St. Scholastica was a good experience for me," said Paymar, who now lives in St. Paul and recently retired as a long-time member of the Minnesota House of Representatives. He's now the executive director of Education for Critical Thinking, an organization combating gender violence. "Like anything in life, it (college) flew by and all of a sudden I had my degree."

One of his favorite professors was the late Sister Mary Richard Boo '51.

"She was a wonderful teacher and an inspiration in many ways to me," he said. (He recalls knocking on her door and asking, "Ms. Boo, can I talk to you?" Her reply: "Young man, you can call me Mary, Mary Richard, or Sister, but you may not call me ‘Ms.'")

After graduating, he earned his master's in public administration from Hamline University.

As for Pence, she spent the late 1970s helping establish women's shelters in Minnesota. She and her colleagues came to realize that merely sheltering abused women was not enough. They envisioned institutional change, but it wasn't forthcoming in the Twin Cities. She came north to Duluth.

Her time at the College allowed her to apply her real-world knowledge to academics.

"I was able to relate my experience to scholarly research - and I loved the process! Classroom learning became exciting, and I was eager to go on for graduate work." Among her mentors was Bob Brenning, an influential ethicist and religious studies instructor who was a founder of the anti-violence organization Men As Peacemakers.

She went on to earn master's and doctoral degrees at the University of Toronto.

An unexpected career path
Paymar didn't set out to take on domestic violence as a vocational goal. He originally planned to become a history teacher.

His focus changed when he met Pence at an organizing meeting to recruit men to work for the DAIP. The two hit it off immediately. Together they wrote "Creating a Process of Change for Men Who Batter," the most widely used treatment model for domestic abuse offenders in the world. The experience changed his life as he re-examined his own attitudes.

"Once I started working as a volunteer and then became the men's program coordinator at the DAIP, I soon recognized that even though I hadn't used violence against a woman, I was as sexist as any of those men that were in my groups. It was a powerful experience to unpack some of those beliefs that I had as a man growing up in our culture."

The revelation not only changed his views of gender roles.

"I knew that I wanted to keep doing that work. I really felt sort of a calling that as a man I should be involved in helping men change - helping other men understand the roots of that violence."

He continued working with Pence on what would become the Duluth Model.

The roots
At the time, domestic violence was seen as a personal problem to be kept behind closed doors.

"You had to be seriously injured before the police would make an arrest," Paymar said. Intimate partner violence was considered a "low-level family matter" and authorities' overall approach was hands-off.

The simple - yet revolutionary - idea behind the Duluth Model was to mandate police intervention, along with collaborative community follow-up from cooperating agencies to help victims.

The concept began to attract attention.

"We always knew that we were doing something very special back in the early '80s," Paymar said. "Practitioners from around the world began coming to Duluth. We knew we were on to something."

"Slowly but surely, each intervening agency got on board, and two years after this organizing effort they agreed to policies and a press conference was called. The Duluth Model was formed," Paymar said.

It includes a curriculum to help abusive men deal with their beliefs about women and to commit to being nonviolent in intimate relationships. Paymar was able to apply the education principles he'd learned at the College to develop this framework.

"Working with men who batter in a group setting in a way is like teaching. You use some of those same teaching and facilitating skills."

The approach is not without its critics.

"There's some criticism... because it focuses on issues of domination and the power that a batterer has over the victim," Paymar said. ""There are some people who believe that a perpetrator should not be arrested and put into the criminal justice system for a domestic assault."

Many of these criticisms boil down to philosophical differences of opinion, Paymar says. He cites a prominent five-year study from researcher Edward Gondolf, who found that among offenders who went through cognitive behavioral therapy - like that prescribed by the Duluth Model - only about 20 to 30 percent were likely to become physically abusive again.

"It all comes down to what people believe: What are the causal factors for the violence, and what stops the violence," Paymar said. "We don't agree with arguments that ignore the long history of men using violence to control women, or the position by some mental health practitioners who claim that women are equally as violent as men, or that battering is caused by psychological problems."

Making progress
Though significant challenges remain in the fight against domestic violence, Paymar is proud to have been a part of an initiative that is making an impact.

"You know in your heart that this kind of intervention saves people's lives, turns families around and makes communities safer," he said.
He said he only wishes that Pence, who passed away in 2012, could have been there with him in Geneva to accept the Gold Future Policy Award from the World Futures Council.

"She was my mentor and a dear friend," Paymar said. "We just had this amazing relationship."

A growing impact
"There are elements of this model working, being adapted, and further refined in every state in the U.S.," said Scott Miller, DAIP Blueprint Coordinator. And, he said, the Future Policy Award is evidence that "the Duluth Model is global in its influence."

Lt. Mike Ceynowa, who supervises the Domestic Violence Unit of the Duluth Police Department, said that the DPD's application of the Duluth Model is a constantly evolving process with positive results.

"We're more effective at handling domestic (abuse calls)," Ceynowa said. "I think we have made it a much more hopeful process for victims. We've put in place mechanisms to make them feel comfortable."

"We are definitely making a difference."

Benedictine values in action
Amy Bergstrom, director of the College's master of education program and DAIP board member, became involved with the issue when she worked on a research project with Pence in the early 1990s.

She said the "groundbreaking" Duluth Model has changed the entire conversation about domestic violence.

"It's saved the lives of women and children around the world," she said.

The Duluth Model exemplifies the moral code that's made available to every student in the halls of St. Scholastica, she added.

"I think it really is our values in action. The imprint that the College likely had on (Paymar and Pence) through their experience as students really solidified their commitment to social justice. That's a strong component of the Benedictine values."