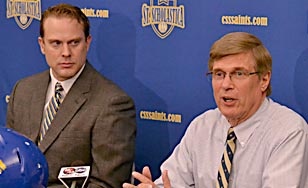 "I am excited to become the new head football coach at The College of St. Scholastica and to join the Scholastica community," Ramler said. "I have enjoyed all that I have learned about the community, the athletic department, and the team. Greg Carlson and his staff did a tremendous job building a championship program that did things the right way both on and off the field. We will look forward to working fervently to continue that tradition, and I am grateful to (Athletic Director) Don Olson and the Scholastica community for the opportunity."

Olson said Ramler "brings a deep and rich experience in Division III football and private liberal arts education to The College of St. Scholastica. He is the perfect fit to build on our solid foundation of athletic and academic excellence as well as service to the CSS and Duluth communities."

Ramler comes from his alma mater, Saint John's University in Collegeville, MN, where he spent last season as the associate head coach and offensive coordinator. Before that he was the head football coach at Carleton College for six seasons, where he was named the Minnesota Intercollegiate Athletic Conference (MIAC) Coach of the Year in 2008. During that season he led the Knights to a 7-3 record, their best since the 1992 season. As a student at Saint John's, Ramler played for legendary head coach John Gagliardi from 1993-96. As quarterback, he was a two-time All-MIAC selection, including being named the conference's Most Valuable Player in 1996. He was also a second team Academic All-District selection in 1996.

"Scholastica is a great fit for me because the College offers what I believe Division III athletics are all about: a great community, a great education, and a great experience," Ramler said. "Part of the allure for me is the historic tradition established by the Benedictine sisters here at Scholastica; years ago they built an amazing college comprised of amazing people. We hope to build a football team that reflects that tradition."

Ramler holds a bachelor's degree in English Literature from Saint John's and a master's degree in education from Wagner College (NY).

The Saints open their 2014 season on Saturday, Sept. 6, at home against Ripon College (WI).