“Life and Freedom On Death Row” with Anthony Ray Hinton 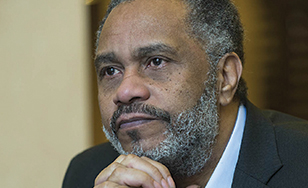 THIS EVENT HAS BEEN CANCELLED.

For the final presentation in this year's lecture series about justice in America, St. Scholastica will host a former death-row inmate who was exonerated after spending 28 years in prison.

The Alworth Center for the Study of Peace and Justice Lecture Series presents "Life and Freedom on Death Row" with Anthony Ray Hinton at 7:30 p.m. Thursday, March 26 in the Mitchell Auditorium.

Wrongly convicted for the murders of two fast-food managers in Birmingham, AL in 1985, Hinton was sentenced to death and held on death row for almost 30 years. He was released in 2015 after a unanimous U.S. Supreme Court decision, and went on to write a book about his experience, "The Sun Does Shine: How I Found Life and Freedom on Death Row." He travels around the nation and the world sharing his story.

The theme of the 2019-2020 Alworth Center for the Study of Peace and Justice Lecture Series is "... And Justice for All." The series confronted American culture with questions to our legal morality, including: Is justice available to everyone in equitable portions? Do we all understand justice the same way?