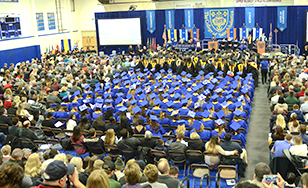 St. Scholastica will celebrate its latest class of graduates during commencement exercises at noon Saturday, Dec. 14, in the Reif Gymnasium in the Burns Wellness Commons on campus.

There are 490 candidates for graduation, with the highest number of graduates in nursing, social work and psychology majors. About 230 are expected to take part in the graduation ceremony.

The event will begin with the traditional processional led by Duluth Scottish Heritage Piper David Bouschor. The American Indian Drum Group, Around the Earth, will perform "Miziiweykaamikiinaang - Honor Song," and vocalist Rylee Newton will sing "America the Beautiful" with accompaniment from Nick Susi. Diane Vertin, Interim Vice President for Academic Affairs, will serve as master of ceremonies.

Sue Ross, Chief Human Resources and Communication Officer at maurices, will provide the commencement address. Ross joined maurices in 1990 and assumed her current role in 2002. She leads all human resource functions including talent acquisition, organizational development, talent and performance management, organizational effectiveness, compensation, benefits and diversity/inclusion. Ross lives in Duluth with her husband and three children, is actively involved in many aspects of the community, and serves on several boards, including St. Scholastica's Board of Trustees.

Kevin Brown, a candidate for graduation who majored in social work, will give the student address. Originally from Duluth, Brown is a retired United States Army veteran who served in Iraq and Afghanistan. He advocates throughout Minnesota for improved mental health care, the homeless, refugees, and human rights. He plans to earn his master's in social work and become a social worker for the VA Healthcare system.

The day's activities will also include a Baccalaureate Mass at 9 a.m. in Our Lady Queen of Peace Chapel on campus, a graduation brunch from 10 to 11:30 a.m. in Somers Lounge on campus, and a reception immediately following the graduation ceremony in Storm's Den in the ground floor of Tower Hall.